Moksha Chocolate has a new addition to our vegan chocolate family that packs the power of premium superfoods in a deeply delicious paleo wonder bar: the Amazonia Functional Mushroom Dark Chocolate Bar.  It's new, it's craft, and it uses the popular sweetener of organic coconut sugar for a rich caramel profile. The world is waking up to the wonders of mushrooms, so why not combine that with the irresistible love of craft chocolate? A bar of Amazonia is a convenient Paleo chocolate dessert with so many benefits!

Mushrooms have been used traditionally as medicine for thousands of years by cultures across the globe. Medicinal mushrooms like Shiitake, Lion’s Mane, and Cordyceps have been used in Chinese herbal medicine to provide immune support, improve digestive function, and increase energy or libido. In fact, in Tibet entire villages venture into the hills at certain times of year to seek out the elusive Cordyceps sinensis, revered by locals to support vitality and increase energy. The Red Reishi, Ganoderma lucidum, is known as Ling Zhi in Chinese, translating to “spirit plant” or “tree of life mushroom.” (Rogers 2011). The Red Reishi has been revered for centuries for its ability to increase clarity and focus, earning a reputation among sages and spiritual seekers to improve the quality of meditation. (Sun-dried Shiitake mushrooms even absorb nutrients from the sun’s rays and can be used as a vitamin-D supplement!)

There are so many accounts of the wonders of mushrooms from ancient lore, and modern scientists are also verifying these claims with robust research. For example, researchers have identified two important polysaccharide compounds from the beautiful gourmet Turkey Tail mushroom, Trametes versicolor, which are responsible for their tumor-fighting capabilities. These compounds, known as polysaccharide krestin (PSK) and polysaccharide peptide (PSP) have been the subject of numerous cancer treatment studies. More than 400 clinical studies have been published in Japan regarding these compounds, and in 1987 more than 25 percent of money spent on natural anti-cancer agents in Japan were for PSK. The cancer treatment drug Krestin, derived from PSK, is approved by both the Chinese and Japanese governments. (Rogers 2011).

Another culinary mushroom which has seen an abundance of research emerge regarding its medicinal properties is Lion’s Mane, Hericium erinaceus. Lion’s Mane has worked its way to the forefront of natural medicine, increasingly recognized as a powerful ally for the nervous system. Hericenones C-H derived from Lion’s Mane mushrooms have been found to induce synthesis of nerve growth factor (NGF), required by the brain for developing important sensory neurons. In one Japanese study, elderly patients incorporated 5 grams of Lion’s Mane into soup for six months. After 6 months, 6 out of 7 patients who had taken the mushroom displayed improvement in perceptual capabilities. (Rogers 2011).

Chaga, Inonotus obliquus, a mushroom found growing on birch trees around the world, has been a subject of major study as well. It has been researched widely for anti-tumor activity, especially in Eastern Europe - an area where the fungus has been used traditionally (Kahlos et al. 1996), and due to the abundance of birch. Studies by Kahlos et al. (1996) also indicate the black skin of the fungus exhibits 100 percent inhibition of human influenza viruses A and B. Antiviral activity of Chaga is believed to be due to content of betulin, hispolon, hispidin, lupeol, and mycosterols. (Rogers 2011).

Considering this, we must ask the question — are all adaptogen mushrooms equal? With the growing number of mushroom products on the market, how does one choose between them? Is there a difference? Let’s take a look at a few considerations. 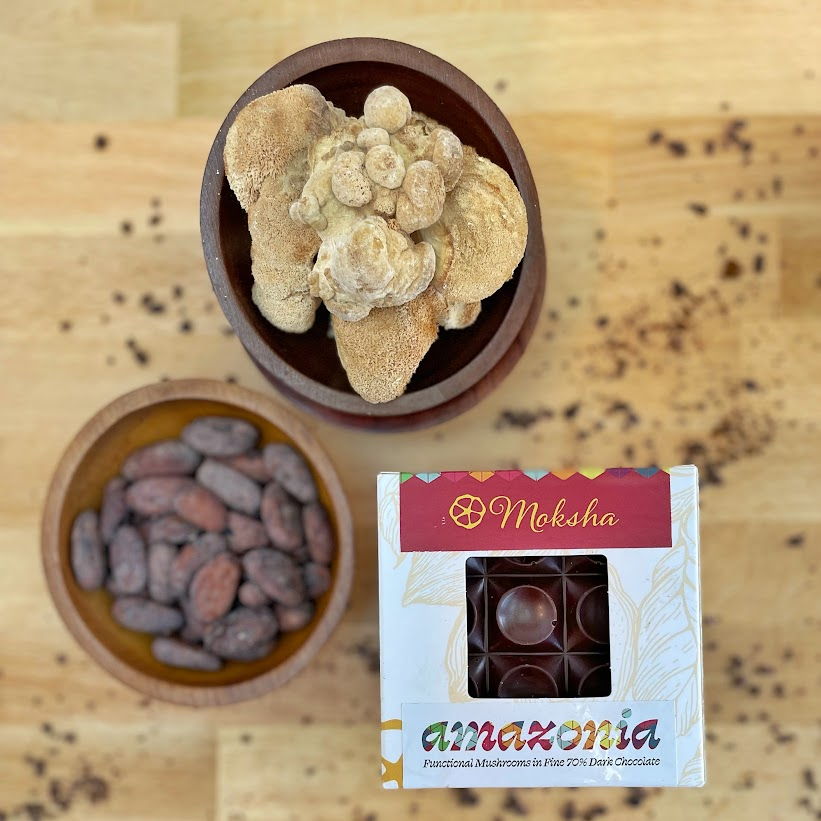 Finally, you might wonder what synergy arises when you consume mushrooms in the form of craft chocolate compared to another delivery method? To start with the obvious, chocolate is easy to love and convenient as a treat to share — perhaps more delightful than stirring powders into liquid. Cacao, the main ingredient in dark chocolate, is also long considered a superfood in its own right. Cacao is full of antioxidants and flavanols, fiber, iron, magnesium, copper, manganese and antioxidants..

Chocolate is simply an enticing carrier for the benefits of functional culinary mushrooms primarily, and flavorwise, the balance of umami from the mushrooms is very palatable and unique. We believe that our customer base that has happily embraced whiskey chocolate, roasted green chile chocolate, and matcha white chocolate so readily is ready to leap into this earthly dimension into a different plant kingdom.

So, how do these superfoods literally combine at the factory? We add our mushroom powder that we have created from fresh whole mushrooms to the young chocolate as it grinds. For 3-5 days our grinding wheels work until the mass is silky-smooth. Once tempered, all of the microscopic plant particles are encased in cocoa butter to help them to be absorbed more efficiently. This is especially important for vitamins A,D,E, and K that are fat soluble.

We also use coconut sugar as our sweetener so you don’t get that sugar spike that you get from cane sugar, and it means that you can still enjoy our chocolate and stay Paleo too! Finding Paleo chocolate desserts is a little tricky due to dairy and sweeteners, but we mastered this for our customers following this diet protocol.

Stop by the factory and give it a try! It's also a great gift for your foodie friends and health-food fans.

About the Author: Zach Hedstrom is the owner of Boulder Mushroom and an educator in the field of mycology. For more mushroom related resources, please visit bouldermushroom.com.